R850 N E is an industrial sweeper which is mainly designed for large area and is manufactured by the Italian company of RCM. The machine operates on batteries; so, the 36v battery and the traction motor have empowered the machine significantly and the machine can be used for a long time. The machine has a cleaning width of 139 cm and works efficiently and professionally at deep cleaning operations. The machine is apt for cleaning large environments. There are two side brushes and one central cylindrical brush that are powered by the machine’s electrical motor. The side brushes are equipped with a dust vacuuming system and can collect the garbage effectively.

The brushes are retractable; thus, the machine is protected against possible blows. The cylindrical brush which is as long as 850 mm is placed in the center of the sweeper and sends the garbage to the waste container in a counter-clock-wise manner. The sweeper is also equipped with a great filtration system and vacuums dust very effectively. The waste container has a capacity of 120 liters which is formed by two removable buckets. Taking advantage of these buckets and the wheeled waste container, the waste can be dumped very easily. The machine benefits from a steel chassis, and high-quality components and has an ergonomic design.

The operator’s seat is adjustable and since his seat is located in the front of the machine, he a has a good view of his environments. There is also a liftable flat which is mainly used for bulky objects, super elastic large tires, and a flashing warning light. The technology used in manufacturing R850 N E is a combination of industry and simplicity and has resulted in very little necessary service and maintenance and all components are easily accessible.

R850 N E is a big ride-on sweeper and is battery-operated whose tank can be emptied manually. Since the machine doesn’t produce any toxic gases, it can be used for collecting garbage indoors. Some unique features that R850 N E benefits from are as follows.

As an industrial sweeper, the machine is equipped with 6 cartridge filters with an area of 6 square meters and the large area of the filter works as a guarantee to optimized functioning of the machine and blocks the way on the exit of fine dust particles. Being equipped with an electrical filter cleaning system, has made a big change in the machine’s performance.

Operator’s Dominance over the Environment

Vacuuming System over Side Brushes

Taking advantage of engineered principles and ergonomic design, help the operator get less tired. In addition, a comfortable seat and considering enough space for the operator are among other points of strength of the machine which have made it popular among users.

Counter-Clock-Wise Rotation of the Central Brush

The way the central brush rotates in R850 N E, improves the cleaning quality, and the most optimized use will be made of waste container’s capacity.

V-Shaped structure of central brush fibers plays an important role in collecting large volumes of large or small pieces of garbage; however, such a structure mainly raises the machine’s quality in collecting smaller pollutants.

In order to lengthen the life span of the machine, and preventing any possible damages due to blows resulting from collisions with the obstacles in the environment, the sides brushes are retractable and will draw in automatically upon any collisions.

The elastic wheels used in manufacturing R850 N E are very solid and puncture-proof, which is why the machine moves very smoothly on different surfaces.

The machine is designed in a way that all internal components are easily accessible. As a result, there will be a very convenient and easy service and maintenance.

In order to improve safety, the machine is also equipped with a warning flash light. 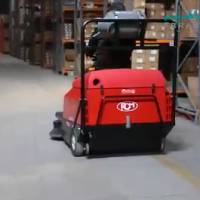 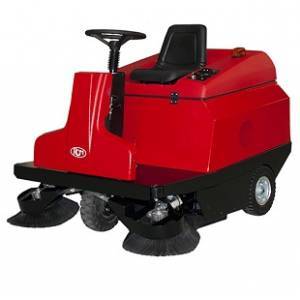