street sweepers are used to perform for the purpose of collecting dry and solid waste. it is widely used for washing of the corner of streets, park spaces and open areas. es9 street sweeper is an iranian model that will be explained later.

due to the rotation of the brushes and dust can be scattered in the air, in order to prevent this issue some water will be sprayed on the brushes and in this way there will not be any dust around while operation.

the brushes are equipped with two types of discs and rotating brushes on the machine. this way the disc brushes guide the waste to the center of the machine and then the rotating brush sends  the contamination to the tank. therefore, this device is suitable for collecting the pollution on the streets and roads.

the sweeper es9 is equipped with an ergonomic adjustable seat, and also the positioning of the device tank in a way that the user has sufficient visibility to guide it.

discharge of load at specified altitude

the device allows the tank to discharge automatically so that the tank is raised to a certain height by a hydraulic jack and then discharged. in different sweeper this height varies depending on the environment.

the usages of the device

cleaning of urban environments such as streets, alleys, sidewalks and other passages is made possible by a manned street sweeper. common pollutants in urban environments such as dust, leaves of trees, bottles and cans, paper waste, etc. can now be easily removed by the device. in this model the machine has a very powerful mechanical and suction system that uses both at the same time to achieve the highest quality cleaning. the machine has a height adjustment to make it easy to cross rough terrain and lower elevations. 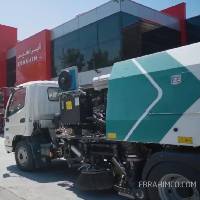 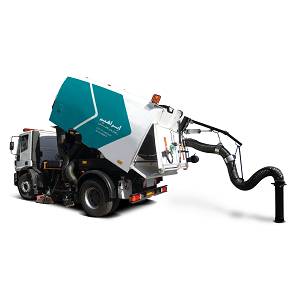